Preserve, record, photograph and restore the Mary B, a legendary iceboat designed and built in Madison, Wisconsin.

We are the current stewards of the Mary B.

Our purpose is to photograph, document, restore, maintain vintage iceboats like the Mary B. We intend to use her and others we may acquire in the future to demonstrate the role that iceboating, craftsmanship and local businesses played in the social history of Madison and Wisconsin.​

It takes a village….  Especially with iceboats.  Here are some of the people who built and repaired our Mary B.

A master carpenter, homebuilder and contractor who built the Mary B, Tetzlaff was acknowledged by Marshall Erdman as the only person capable of realizing Frank Lloyd Wright’s plans for the First Unitarian Meeting House in Madison, Wisconsin

A native Madisonian and third generation Lake Mendota boatman, Carl was the designer and the first skipper of the Mary B. Obsessed with speed and iceboating. He was a champion outboard hydroplane racer in the late 1920s and early 30s. During the 1930s, he turned the Fritz, another Tetzlaff iceboat, from just a fast boat into a champion, winning the Hearst and Stuart cups and several Northwest Ice Yachting Association regattas. Carl was a charter member of the Madison Sports Hall of Fame, inducted in 1963.

The owner and the man whose love for Madison created the Mary B. One of Madison’s largest electrical contractors, Orvin T. Havey was not a sailor or iceboater and never took her tiller. Like the owner of an Indy car, sports team or thoroughbred racehorse, he was the man who made it all happen, bringing together Madison’s best craftsmen and designers not for money, but for the glory of pure sport.

Another Madison sailing family and owners of the Wisconsin Foundry and Machine Company located in the 600 block of East Main Street in Madison. With the exception of a few pulleys, they fabricated all of Mary B’s custom hardware. Although they specialized in massive rock-crushing machinery, they were happy to lend their talents to anything boat-related.

A National Sailing Hall of Fame inductee and champion iceboat sailor. As a teenager, Bill was part of the group that helped Frank and Carl build the Mary B. Since then he hand-built her mainsheet blocks, current 40-foot mast and has made dozens of repairs and improvements that keep the Mary B sailing fast and strong.

Since 2016, Ice Boat Foundation volunteers like Jerry and Paul have contributed hundreds of hours restoring the Mary B and telling her story.

Who Was Mary B?

On January 29, 1950, Madisonians wandered into the kitchen, filled their coffee cups, fried a couple of eggs and turned to the sports section of the Wisconsin State Journal. Sharing some of the valuable space above the fold with the headline proclaiming Jack Dempsey the greatest fighter of the past half-century was another “Mary B Wins Pair of Races.”

During the 1950s, this headline or something like it appeared dozens of times in both Madison dailies. Mary B was fast, really fast, but just who or what was she? A racehorse, track star or maybe a downhill skier? None of the above—she was an iceboat. Thirty-nine feet long and weighing in at around 2,000 pounds, she was not just any iceboat. She was the dream of one of Madison’s largest electrical contractors and public-spirited citizens, Orvin “O.T.” Havey.

Iceboats are built of Sitka spruce from the distant forests of the Pacific Northwest. Prized for its light weight, flexibility and strength, it’s the preferred material for airplanes, gliders and iceboats. Havey ordered a boxcar full of the stuff. Tetzlaff and a helper spent days inspecting each piece of these 40-foot boards, rejecting any with even the slightest flaws.

All of Mary B’s hardware, except for a few pulleys, was fabricated at the Wisconsin Foundry and Machine Company located in the 600 block of East Main Street.

On March 22, 1948, after nearly three years of building, Mary B was christened on Lake Mendota’s ice by her namesake, Mary Bernice Havey. As O.T. planned, the B was a champion, bringing the Hearst and Stuart Cups to Madison time and time again. She became a legend, eclipsing that of her owner and, to some extent, the men who sailed her, cementing Madison’s reputation as the Iceboating Capital of the Universe.

Since 2016, she has been owned and maintained by the Ice Boat Foundation Inc., a non-profit dedicated to preserving classic iceboats like the Mary B.

* The Hearst (as in William Randolph) and Stuart cups date back to 1904.

Mary B and Ferdinand the Bull are the only Class A Stern Steerers to notch eight Northwest regatta victories in the 100-year history of that event. 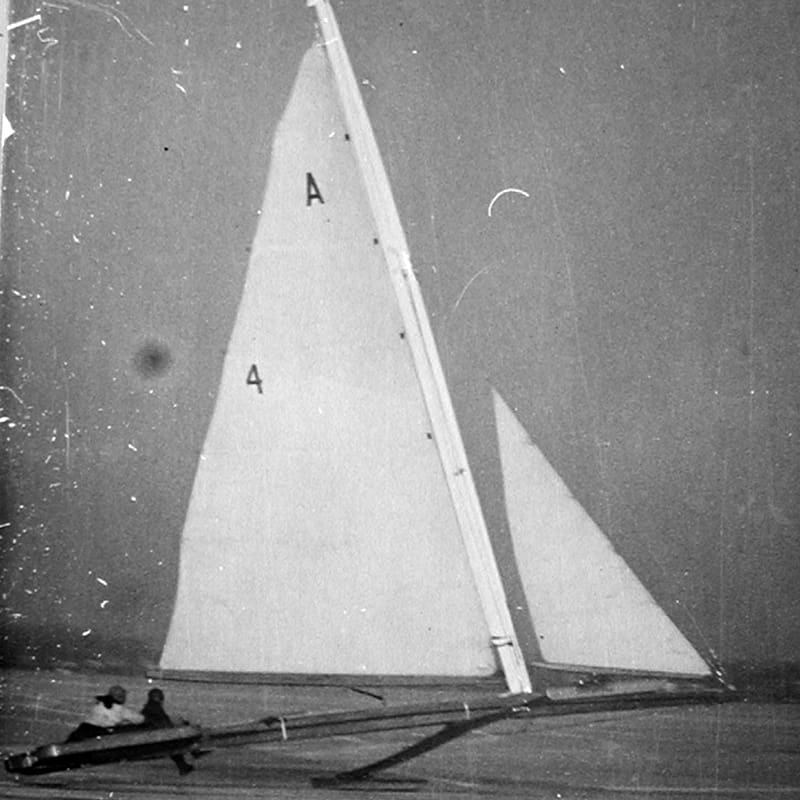 Technically, Mary B is a Class A Stern Steerer, which means she carries more than 350 square feet of sail. Check out her measurements and you’ll see why iceboaters call boats like her “big boats.” 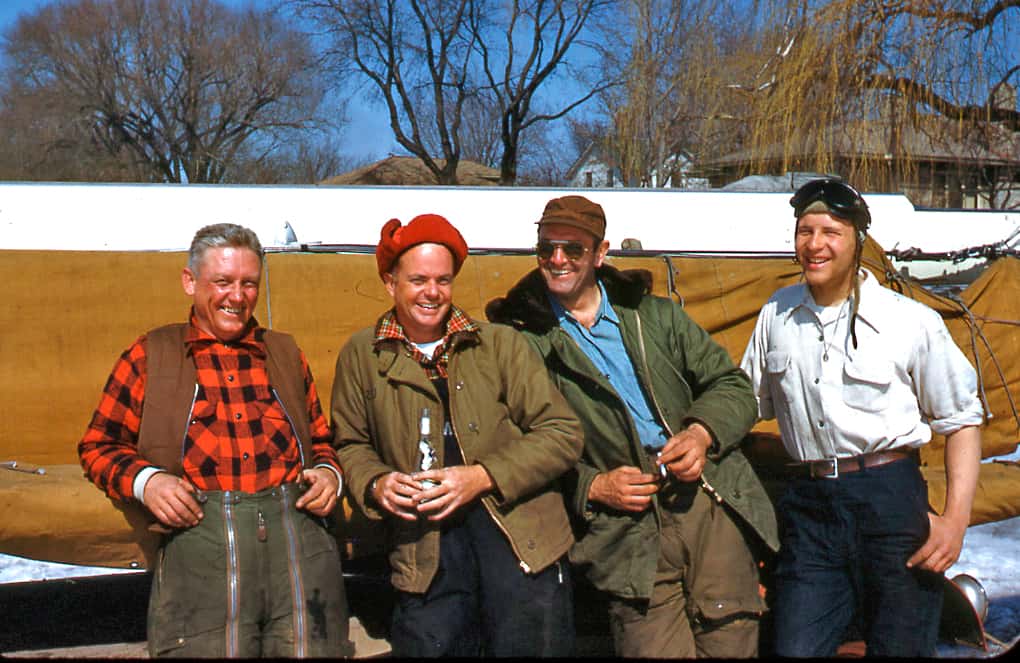 Charlie Miller (right) and a group of iceboaters relax with a beer after a great day on the ice. Photo courtesy Four Lakes Ice Yacht Club. 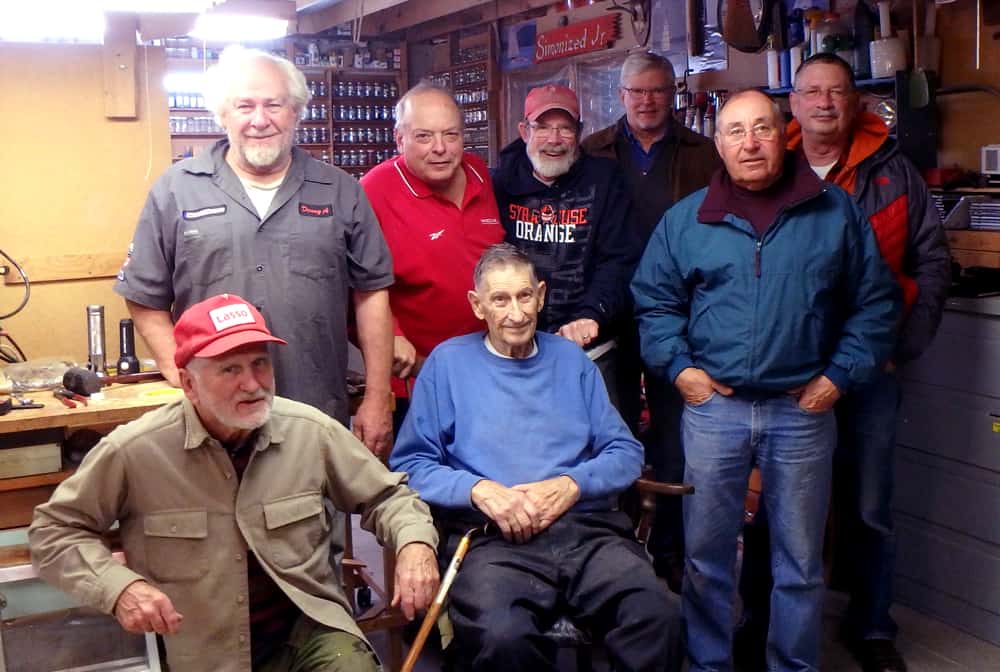 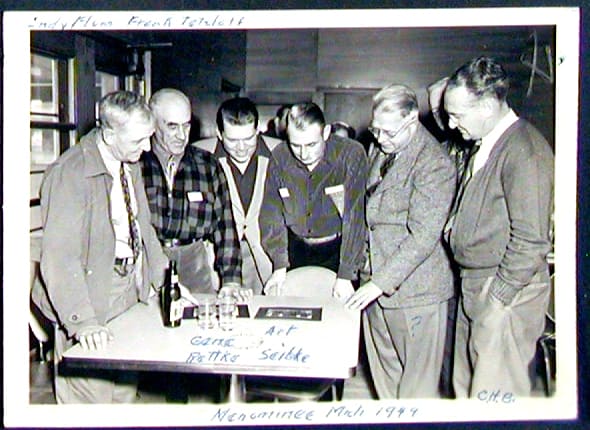 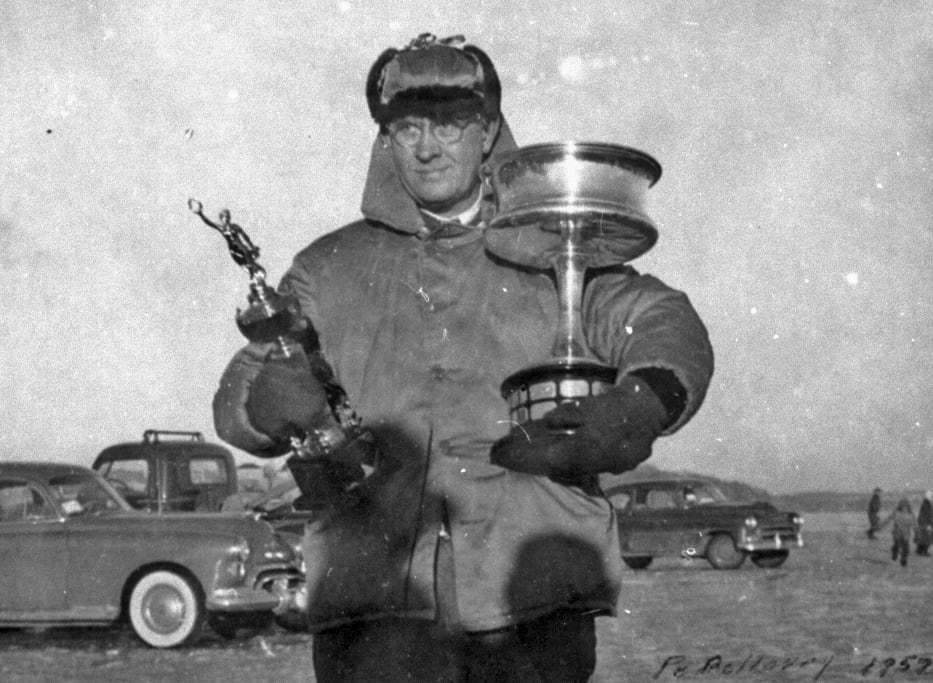 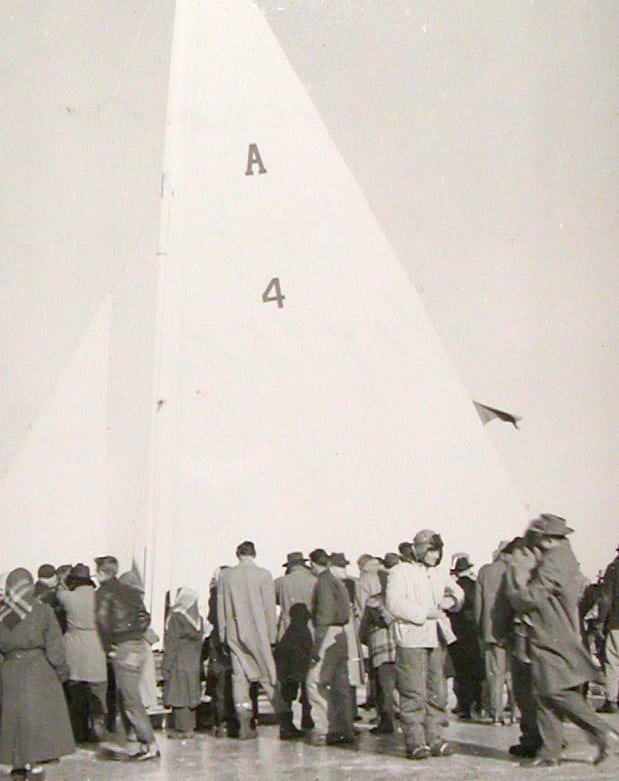 Crowds gathered on the ice to get a close look at the Mary B after a race on Lake Monona 1952. Photo courtesy Four Lakes Ice Yacht Club. 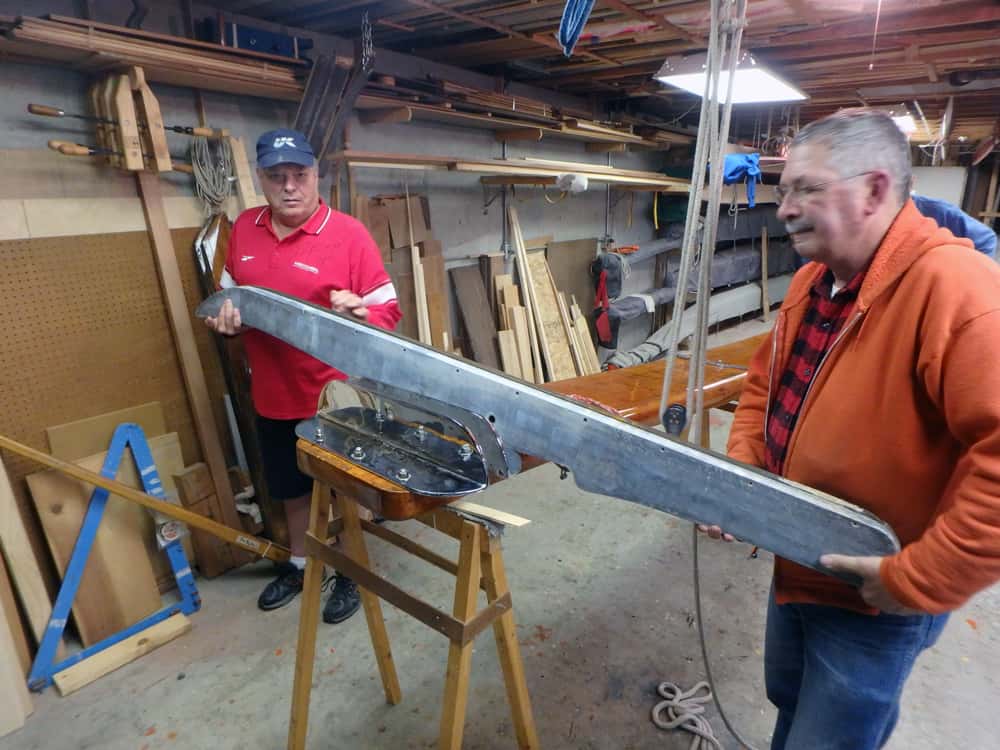 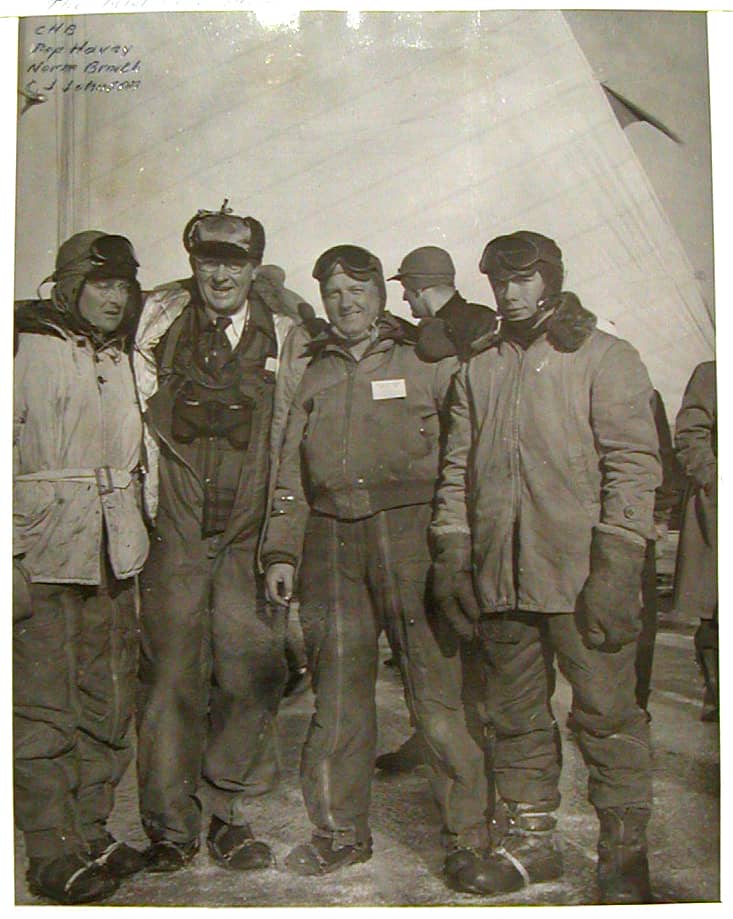 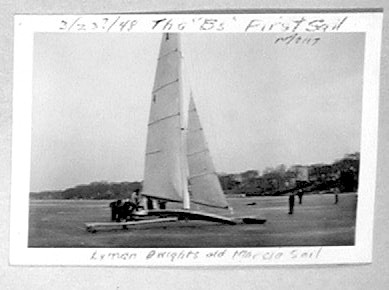 The Mary B was the dream of one of Madison’s largest electrical contractors and public-spirited citizens, Orvin “O.T.” Havey. Though he wasn’t much of a sailor himself, O.T. loved the sport and he loved Madison. This love affair launched him on a mission to bring the Hearst and Stuart cups, the most important trophies in the sport back to his hometown.*

Iceboats are built of Sitka spruce, a tree that grows in the distant forests of the Pacific Northwest. Prized for its light weight, flexibility and strength, it is the preferred material for airplanes, gliders and iceboats. Havey ordered a boxcar full of the stuff. For an iceboater, opening the door to this car must have felt like opening the vault at Fort Knox. Tetzlaff and a helper spent days inspecting each piece of these 40-foot boards, rejecting any with even the slightest flaws.

The Mary B became a legend, eclipsing that of her owner and, to some extent, the men who sailed her cementing Madison’s reputation as the Iceboating Capital of the Universe.